I guess it was watching the Eco-Challenge on TV that got me so fascinated with adventure racing.

But wait, it was more than that.  The idea that when my feet were too sore to go on running but I wasn’t ready to quit, I could hop on a bike and keep going— that was pretty attractive.  Also, I loved the idea of being part of a team.  No more suffering in solitude; I could share both the pain and the fun with my teammates.

Most of all, I guess I wanted to try it for the same reason I moved from road running to trail running a few years ago—I love adventure, plain and simple.  Give me the jungle bushwacks, the raging whitewater and the plunging cliffs.  Get me off the pavement and into the thick of the action.

There was one problem.  When I first got the crazy idea to enter an adventure race, I’d never ridden a mountain bike, rappelled off a cliff or paddled a boat.  I spent months on the internet, looking longingly at races in my area, thinking, “How do I get involved in this?”

One day I came across a website for Odyssey Adventure Racing, a company based in Virginia that offers multiple adventure races, off-road triathlons, and—lo and behold—a six-day Adventure Racing Academy.  The Academy was based at Camp Washington Carver, a rustic lodge near West Virginia’s New River Gorge. The itinerary was comprehensive: training in navigation, paddling, bike maintenance and ropes.   Plus, there were classes in teamwork, gear, foot care, and nutrition.  Best of all, at the end of the week, students would form teams and race in a real, honest-to-God, 40-hour adventure race, the Endorphin Fix.  I signed up immediately.  Now, looking back at excerpts from my journal, I remember it as the most challenging and enjoyable week I’ve ever had.

Don Mann, co-founder of the Academy and ex-Navy SEAL, taught our navigation course this morning.  As a kid in summer camp I couldn’t find my way out of a paper bag, but Mann has a way of making you feel comfortable and confident in your ability to learn.  He taught us how to read a topographical map, how to use a compass to take a bearing, and how to recognize terrain features.  After a three-hour class, we navigated to five orienteering points in the woods.  Then, after dinner, we did it again in the dark, which was much harder.

The alarm rang at 6:30 a.m.  I woke right up, but I guess some people were tired from last night’s orienteering exercise.  Robyn Benincasa, our headlining instructor and one of the world’s premier adventure racers, ran up to the dorm and shouted, “OK you maggots, get your butts out of bed!”  Everybody got up fast.  We went outside for “Boot Camp with Robyn” and for the next exhausting hour, ran, sang, did push-ups, and crawled on the ground.  Mercifully, the session ended at 9, just in time for breakfast and Benincasa’s class on teamwork.  She talked to us about how important it is to communicate with and respect your teammates, and to figure out how to equalize the strengths and weaknesses of the team.  “You’re only as fast as your slowest teammate—and that could be someone different in each event,” she told us.  “If you don’t work together, if everyone runs her own race, the team won’t succeed.” 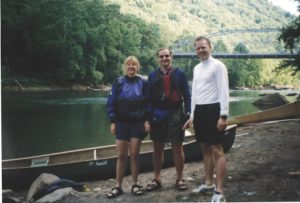 We spent all day at the New River, learning to paddle canoes, whitewater inflatable kayaks and sea kayaks.  The best part was learning to steer the inflatable kayaks through whitewater rapids.  Some students went for an unintentional swim, but my partner and I stayed in our boat.  We soon found that it was all about learning to read the whitewater, picking the best lines, and leaning into the current instead of away from it.

Ropes day.  Everyone was nervous, including me.  I’m not fond of heights. The instructors took us to the “Endless Wall”, a world-class climbing site, where we peered down at the New River 1500 feet below us.  There were three ropes hanging from the cliff: two for 150-foot rappels and one for ascending, where we climbed straight up a rope using two mechanical devices called jumars.  If I looked out at the spectacular view of the gorge instead of down at the ground, I found myself forgetting all about my fear of heights.

Today every single student rose from bed without delay.  Later, at midnight, the Endorphin Fix begins and the camp is filled with anxious anticipation.

Last night, Mann delivered a rousing pep talk, assuring us we could and would finish the race.  “There’s no reason you can’t finish,” he told us. “After all, it’s only 40 hours.”

As I listened to him, I nodded in agreement.  But it’s easy to think tough when you’re sitting in a warm, 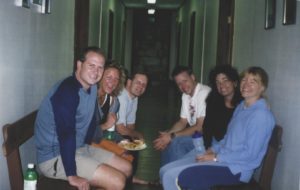 comfortable lodge with your hands wrapped around a steaming cup of hot cocoa.  After teaching our last class, in bike maintenance, the instructors helped us prepare for the race, and I kept thinking about whether I would finish the course on my first try.  I’ve heard many racers don’t.

Well, hard as we tried, my team didn’t finish that first Endorphin Fix.  About 27 hours and 80 miles into the race, we got lost and couldn’t recover in time to make the next cut-off.  But we stuck together as a team, worked on our navigation skills, and went back to try again until we finished. Eco-Challenge, here we come.