On Monday, two hikers from Michigan went missing on Mount Holy Cross, near Vail Resort.  They were last seen at an altitude of 13,300 feet, close to the summit of this rugged and challenging Colorado mountain.

On Tuesday, the Vail Mountain Rescue team searched for them all day without success.  Tuesday night, they put out a call to other teams in Colorado for assistance.  They asked for teams to report to a trailhead at the base of the mountain, prepared to search all day and to be transported up the mountain via a Blawkhawk heliopter from the nearby National Guard High Altitude Training Center in Eagle, Colorado.   A small group of four of us from  neighboring Summit County responded early on Wednesday morning, including myself, and our group leader, Brian.

As you might imagine, mountain rescue teams have their share of testosterone.  Most of us are volunteers and love what we do; we love the outdoors, serving our communities, and knowing that we’ve made a difference in people’s lives.  But if we’re to be truly honest, we also love helicopters, ATV’s, media coverage that makes us look like heros, and the ability to show off the best of our skill and talent.  Although a high percentage of mountain rescue team members are men, I would venture to say this has more to do with the type of person that is attracted to mountain rescue than it does with gender.  I’m a woman and I’m all over the “helicopter-on-the-5:00-news” thing.

But let’s get back to Brian.  Brian is a different breed of mountain rescue leader.  He is assertive when he needs to be but laid back in his approach; he’s focused on performance but always practical; and above all, he has a top-notch sense of what makes a good teammate, whether that be in the context of an individual on our team, or a team within the mountain rescue community.

As team leaders gathered around the incident commander on Wednesday morning, the desire to shine was evident.  Several teams had driven a long way in the middle of the night to get there, and everyone was eager to make a mark on the search.  The incident commander asked for a team with high angle specialists (climber-types with technical rope skills) to take the toughest section on top of the mountain, and the competition for the assignment was palpable.  Then he asked for other teams to take less technical but still challenging sections below the summit.  Then he said, “I have a relatively easy section, lower down in Reed Meadow, that I need covered.  It’s not a likely search area, but we need to close it out.”

No one raised their hand.  Clearly, there was no glory to be had in Reed Meadow.

Brian, in typical fashion, shrugged and said, “The Summit County team would be happy to cover that section.”

“Great,” said the IC.  “You’ll load the chopper on the second run, right after the dog team.” 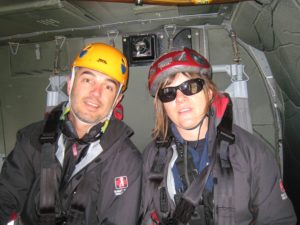 The four of us geared up, excited to be going in so quickly.  The Blackhawk landed in a wide open field, and we loaded up and took off.  Shortly before our landing in Reed Meadow, one of the Eagle County Sheriff’s Office deputies on board signaled to Brian, holding up two fingers and pointing out the window.  Sure enough, our missing hikers had been spotted already, waving frantically at us from below.  Within a half hour, they had been picked up and transported back to the staging area and the mission was over.  The teams that had driven so far and been so eager to show their prowess never even got the chance to go into the field.

The moral of the story: Leadership and teamwork are about seeing beyond one’s own desires to the bigger picture.  What’s needed overall?  Who can fill that need, regardless of the prestige it may or may not bring?  There might have been a couple of us (no, I’m not admitting anything) who felt a little disappointed when we heard Brian volunteer us for the “easy” job.  But in the end, no one got the Blackhawk ride but us.

We should have brought snowshoes

A missing soldier, and too many helicopters

Wondering if she would make it