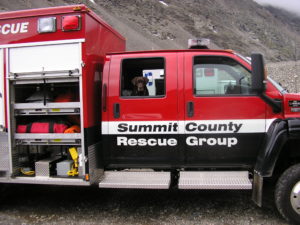 I sat in Rescue 3, pouring over maps with Mark Svenson for perhaps the third time that morning, frustrated that I couldn’t seem to find a job for myself.  It was rare that I ever sat at command; usually the coordinators sent me straight into the field.  Today, however, I’d arrived hours late after searching on Quandary Peak until after midnight the night before, and now there was no one else around to send me in with.

“What about this?” I asked him, pointing at a narrow gulley to the southwest of the mountain.  “His dad said he was kind of an explorer.  If I was exploring, this gulley would look pretty interesting to me.”

Svenson nodded slowly, considering.  “Yeah, but the area directly west is so much more likely, and we don’t have that many teams in it yet.”

“OK, well how about sending me there then?” I said, trying not to sound exasperated.

“I don’t have anyone to send you in with.”

“What about Schlough?  He’s right over there.”

“I’m holding him in case we need medical,” Svenson said patiently.  “Just hold your horses, we’ll find something for you to do.”

He broke off to talk to someone on the radio, and I jumped out of the truck to stroll around the parking lot again.  Despite it being August, the weather was typically blustery at the trailhead of this 14,000 foot mountain, and I wore several layers under my rescue jacket.  Last night it had been raining and even colder, and we had searched for the missing Missouri hiker on all sides of the mountain, all the way to the top.  His family had reported him missing in the late afternoon; he’d left their Breckenridge condo at 8:00 that morning, saying that he was going for a hike and would be back “in a couple of hours.”  His truck was parked at the south trailhead of Quandary, next to Blue Lakes, but beyond that we had no idea where he might have gone.  But according to his father he was an experienced hiker who had summited Quandary more than once before, so there was certainly reason to be concerned.  He was in Breckenridge to prepare for his sister’s wedding next week, so it was unlikely that he had just decided to wander off to a bar for the last 24 hours.

I heard Svenson calling me and raced back to Rescue 3, hoping for an assignment.

“The Flights chopper is on its way to do a flyover,” he said.  “If he finds anything, you and Schlough are on standby to go in with him.”

“Woo hoo!” I shouted.  I knew it was unlikely that the pilot would find something, given that a National Guard Blackhawk had searched all morning with no results, but I was just happy to have a job. 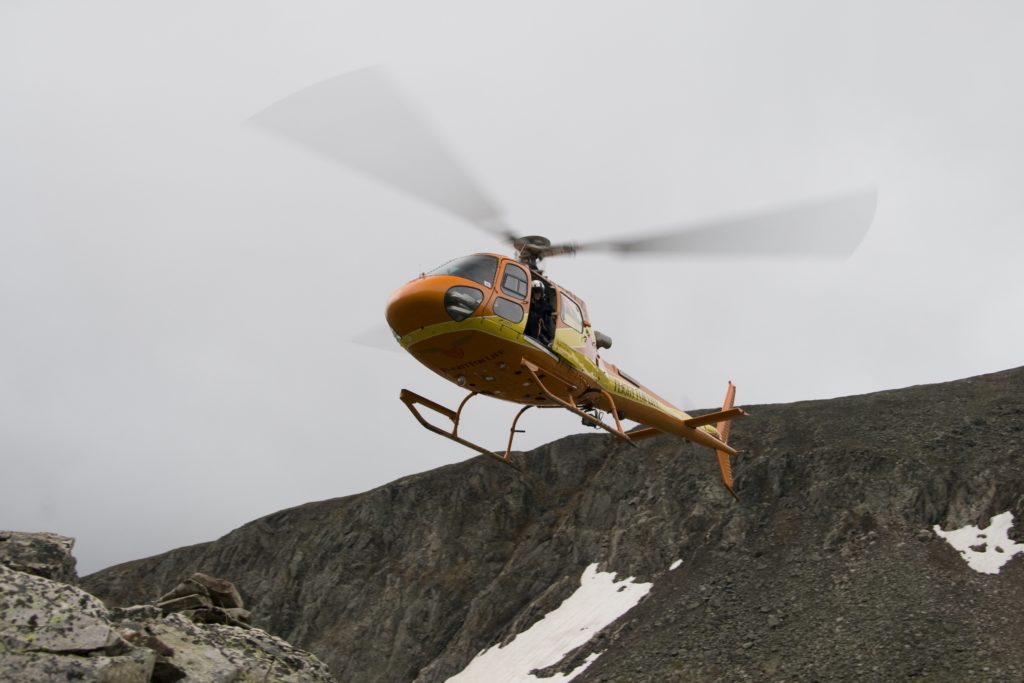 I got my pack ready and went to hang out with Schlough, who was sitting on the back of a trailer chatting with Sheriff’s Office deputy Mark Watson.  The Flight for Life chopper passed overhead in a flash of orange and yellow, swooping toward the couloirs on the west side of the mountain.  To our utter amazement, we heard the pilot’s voice on the radio only a few seconds later: “Quandary command, I’ve spotted him.”  I saw Svenson running back toward Rescue 3, just as surprised as we were.   “Can you tell anything about his status?” he asked the pilot.  “Not good,” the pilot answered.  “This is a recovery.”

That meant he was dead.  I’d never been first on scene for a recovery before.  “Do you want to give us a body bag?” I asked Watson.  He shook his head.  “No, don’t touch anything when you get there, I have to investigate.  Just make sure he’s really dead and let us know.”

Mark was waving me over to a lower spot in the gravel parking area, where the chopper was to land.  “You’re going in first,” he said.  “I’d rather have a paramedic in first, but they said they wanted the lighter person.”

I grabbed my pack and stood near the landing zone, watching the chopper set down.  A flight nurse got out and waved me over to the right side of the chopper.  She handed me a helmet, and I fumbled with the headset and control box; it had been almost a year since my last helicopter deployment training, and I was rusty.  I resolved to pay more attention in training next time.  The nurse, a tiny woman with a tiny voice, was kind and didn’t make me feel stupid; she helped me get set up, and then we climbed into the back of the chopper. 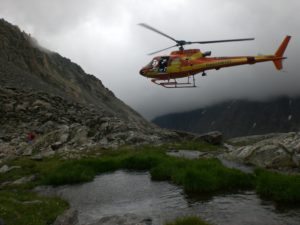 After a stomach-lurching ascent, we dipped and spun back toward the west couloirs.  Pat, the pilot, talked to me on the headset.  “I’m going to make a low pass over the body and then I’ll drop you at the nearest LZ.  Then when we take off again we’ll make another pass over the body so you can get your bearings and see where it is from where we drop you.”  I nodded gratefully, knowing the huge boulders in the west couloirs would make it challenging to find my way.

We were there in less than a minute.  “See it?” Pat asked me as we banked hard to the left.  It was impossible to miss.  The man was upside down, his head on one boulder and his feet on a boulder above him.  His shirt had ridden up to his chest because of the angle of his body and his arms were thrown over his head.  I couldn’t imagine that he was alive.

Pat set me down several hundred yards away, where I could no longer see the body, and as promised he dipped the chopper over my target on his way out.  I fixed on it, trying to get my bearings.  It was a gray and cloudy day and everything looked the same; huge boulders with scree fields at their feet, everything on the ground the same color as the sky.  I started scrambling up the couloir.

It took about fifteen minutes, with a few disoriented moments and direction changes, but I found my way.  The man’s eyes were slightly open and his skin had a bluish tint, but I felt for a pulse anyway.  He was cold.  The back of his skull was crushed, and there was a deep gash on his left thigh, and a fold in his back that seemed to indicate a broken spine.  Items from the pockets of his shorts littered the rocks around him; a camera, a prescription bottle, a pocketknife, keys, and some magnetic bottle caps.   He was young; I think his family had said 32 or 33.

I tried to radio command but no one could hear me.  I could hear Svenson talking with Schlough, who was in the chopper now and headed my way, and they were asking each other if I was on scene yet.  “Command, this is Anna, I’m on scene!” I said several times, but there was no response.  Then I heard traffic between command and one of our teams close by, and they were being directed toward me.  Scanning the boulder field to the south, I spotted two women and a dog.  Denise, Andrea, and Tracker.  Denise was ahead, nearly sprinting.  Back toward the north, I saw the chopper land and let Tim Schlough off, and he began hiking toward me also.

There was nothing to do but wait for everyone to arrive, so I sat on a rock and studied the scene.  There didn’t appear to be any blood on the rocks above.  Maybe 200 feet up above the body was a vertical face, another 200 feet high, and that must have been what he fell from.  It seemed strange that he hadn’t hit somewhere else first, however.  Then again, with the rain last night, maybe all the blood had washed away.  I picked up the prescription bottle, curious about whether drugs had been a factor.  We knew from his family that he suffered from back pain and was on medication.  The bottle felt very light; empty.  It was easy to imagine what had happened; although he’d only intended a short hike, he felt pretty good after a couple of pain pills.  He decided to go all the way up.  He got disoriented on his way down, stumbling off the already challenging west ridge route into one of the treacherous couloirs to the south, all of which are impossible to descend without technical gear.  Maybe it got dark, and he couldn’t see where he was going.  It started to rain, and the rocks were slippery.  He hurried, not wanting to alarm his family by being any later, and then he slipped and it was all over.

Denise was getting close.  I shouted to her, “No rush!  He’s cold.”

“What?  I have lots of warm clothes,” she shouted back, hearing only the word “cold” and assuming he must be alive.  I shook my head.  “No, I mean he’s dead!” I shouted back.

A few minutes later, Denise and Schlough were both there, with Andrea and the dog not far away.  Schlough, a paramedic with many years of experience, knew what Watson would need when he arrived, so he started hiking uphill from the body, looking for more clues as to what happened.  He radioed the pilot and asked him to fly low over the cliff above us and look for splashes of blood.  There was no sign of anything.

In another twenty minutes, Mark Watson had arrived and begun taking photos.  A team from Rocky Mountain Rescue Group arrived on foot from the west ridge route, and the chopper dropped off a couple more people from my team.    It was time to get to work, for what would be a difficult evacuation. 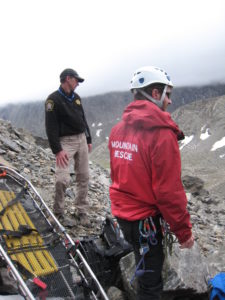 I helped Mark inventory the personal items around the body and put them in an evidence bag.  The second time I picked up the prescription bottle, I looked more closely at it.  It wasn’t empty; it was filled with marijuana.  Everyone laughed, and someone said, “I believe this goes to you, officer.”  But Mark didn’t laugh.  He took the bottle from me, and said, “He had a prescription for marijuana.  For back pain.”  I love that guy.  Whether it was true or not, Mark knew that talking scandal around a dead man and his poor bereaved family was nothing but cruel, and he wasn’t going to stand for it.

We lifted the cold, heavy body into a body bag and put it in a litter, with three people on each side.  Then we began the long process of setting up anchor systems to belay the litter back down to the landing zone.  Fortunately, Pat had agreed to come back and pick it up there, saving us many hours of hard work.

I wondered as we worked if any of the family would be at the trailhead when we arrived.  I wondered if they’d been told yet.  Would the sister’s wedding be postponed?  Would anyone blame themselves for not calling for help sooner yesterday?  It was hard to imagine what it must be like for them…and I didn’t want to. Because we couldn’t do what we do every day without shutting off that kind of empathy, without growing thick skin and a calloused sense of adventure.  Maybe someday it would be one of us; until then, it would be just another poor guy with bad luck, a guy we could make fun of for smoking pot, a guy that made one wrong move and paid the ultimate price for it.

We should have brought snowshoes

A missing soldier, and too many helicopters

Blackhawks, bravado, and lessons in teamwork on Mount Holy Cross