Mark was beginning to stumble, I noticed.  Sweat poured down his face and into his eyes. The sun was mercilessly hot, and we were out of water.  Les didn’t look too good either.  I asked him a question, and he said, “I’m too tired to talk.” We should have been in the woods, but a navigational snafu had forced us to follow a shadeless stretch of paved road to the final checkpoint, where we would transition back to bikes for the final 15 miles of the race.  We had already lost one teammate to heat exhaustion at the previous checkpoint.

A pickup truck slowed behind us, then pulled over.  The driver leaned out of the window, chewing on a toothpick, and grinned at us.  “You folks want a ride to the store?” he asked in a thick Virginia accent.  Yeah right, Bubba, I thought wryly.  Couldn’t he see our race bibs?

To my surprise, Mark walked across the road without a word and climbed in the back of the pickup.  I stood speechless, trying to figure out what he was doing.  Was he quitting the race?  Or perhaps just going for water, with plans to re-join the team at the next checkpoint?  Before I could organize my thoughts enough to ask him, he grimaced at me, shook his head, and buried his face in his hands as the pickup pulled away.

I turned to Les, our newest member of the team, and the only one I had left.  “Does this happen often?” he asked.

I would have laughed if we weren’t already vying for the title of Team Perpetual DNF.  No one denies that Odyssey Adventure Racing’s events are the most challenging of their kind, but we had now failed to finish three races in a row.  This was our first attempt at the Odyssey One-Day race, after two attempts at the two-day Endorphin Fix, and I was getting discouraged.

We’d had challenges from the beginning with this race. Farrell dropped out two weeks prior with medical issues, and we replaced her with Les, a spunky New Yorker I had just met at the Jay Challenge.  Then, the very morning of the race, the airlines lost Tom’s bike and luggage. After a frantic shopping spree, he realized he had no chance of replacing all the gear in time for the 7:00 pm race start, and he flew back to Atlanta in frustration.  Mark arrived at the race start ten minutes before registration closed after dropping Tom back at the airport.  He found me worriedly pacing the parking lot wondering where the rest of the team was. We thought fast.

“I’ll ask Kirb if we can change our registration to a solo and a duo,” I told Mark and Les. “What’s he going to do, send us back home?”

Steve Kirby, Odyssey’s administrative director, had a better idea.  “Let me introduce you to Richard,” he said. “He’s racing solo only because he couldn’t find a team.”  We circled the parking lot searching for Richard, a 58-year-old attorney from Cleveland.  When we found him he agreed to join us enthusiastically.

The race started promisingly enough.  In honor of participant John Bingham, the Runner’s World columnist nicknamed “The Penguin,” we started with a 5K prologue run, followed by a scramble up the short but steep Suck Mountain. An hour later, we crossed the official race starting gate somewhere in the middle of the pack, with high hopes of remaining there.  For us, a mid-pack finish, or even a last-place finish, would be an accomplishment.

We passed an agreeable night trekking and biking forest trails with steep and challenging climbs, under a clear, starry sky.  In typical Odyssey fashion, much of the bike section was a “bike-wack,” sometimes requiring us to hand our bikes to one another to clear the obstacles. At the third checkpoint, each team elected a member to rescue a “body” from a dark swimming hole before transitioning to our bikes. Our new teammate Richard volunteered to brave the cold waters, and with the team lighting his way with headlamps he found the blow-up doll in less than a minute.

The trouble began at about 4:00 am, when we reached a junction in dirt roads where ten or twelve teams had congregated to compare navigational notes.  “We’ve already been down all of these roads,” one woman told us, dismally. “None of them lead to where we need to be.”  Several other teams nodded agreement. I sat down in the middle of the road, exasperated.  This was how our Efix races always fell apart—lost in the woods with a bunch of other teams who had been lost even longer than we had.  Odyssey’s course design was, as usual, downright sadistic.

My orienteering skills were so bad that we always excluded me from the navigation committee, headed by Mark but supported by everyone else. I put my head down on my pack and took a snooze.  When I awoke, twenty minutes later, my team had chosen a road, but no one seemed particularly confident in the choice.  We followed it for almost two hours as it narrowed and turned to a trail, then ended abruptly on a steep ridge.  We tried another trail, only to have it do the same.  We tried a third trail.

Finally, at 8:30 am, we were met by another team coming the opposite way who told us we were still on the wrong trail. We stopped to talk.

“The river cut-off is 10:00 am,” Mark said. “If we keep going on this trail and it dead-ends, we have no hope of making that cut-off.”  We considered our options.

“I worked pretty hard for that swimming certification,’ I said. “And I was really looking forward to the white water river boarding, since it’s a new event.  What do you say we skip the next checkpoint and go straight to the river?”  Everyone agreed. We might get disqualified for missing too many checkpoints, but at least we would enjoy all the events of the race. 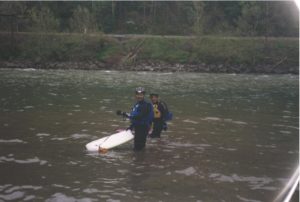 We made the river cut-off at exactly 10:00 am, the last team allowed into the water. The event, a relatively new one in adventure racing, consisted of paddling down the river on boogie boards, through some class one and two rapids and on long stretches of flat water. We found the rapids great fun, although rough on the knees and feet, but the flat water became grueling by the second mile. We all developed raw chafing marks under our arms from paddling the boards, and the guys complained that they should have worn cups to protect themselves from rocks. I thanked the river gods that my gender spared me at least one discomfort.

We finished the four-mile section of river at 2:00 pm, and once out of the water we found that despite our sunburns and chafing sores, we had been escaping a brutal 95-degree heat during our sojourn in the river. Shortly after we began the next trekking section, Richard over-heated and was forced to drop from the race. Dissension struck the team as Les and I argued over who was to run back to the previous checkpoint for help.

“You guys wait here and I’ll go,” I said, certain that I was fresher on my feet than anyone else.  Mark, at 220 pounds, was clearly already feeling the heat, and Les was a rookie, not yet aware of his strengths and weaknesses in a 24-hour race.

“No, no, you sit, I’ll go,” Les protested, following me down the road. Against my will, I felt myself getting annoyed.  What reason would he have to insist on going himself other than that I was a woman?

“Les, just sit down!” I barked. “It will only take me a few minutes.  You don’t have to handle everything all the time, you know.”  Les sat down, looking distraught.  I kicked myself mentally. Handling situations tactfully was not my strong point.

The volunteers from the river checkpoint drove back to pick up Richard on the side of the road, and we each hugged him and bid him goodbye. “I’m so sorry to let you guys down,” Richard said, clearly upset.  We assured him he hadn’t.  No one said so, but we knew we weren’t likely to make an official finish anyway. And we were right; three hours later, the Bubba in the pickup truck made sure of it.

Still unsure of Mark’s intentions, Les and I decided to continue to the next checkpoint and see if he was there. We reached it after another half hour, in someone’s backyard, where we were thrilled to find a garden hose.  We filled our water bottles, prepped our bikes, and told the checkpoint volunteer that we had lost two teammates but were continuing on.  Just then, Mark walked into the checkpoint.

“Don’t laugh,” he said, “but that guy was trying to take me to a store in the next town.  When I realized how far past the checkpoint we’d gone, I asked him to pull over and let me out, and I ended up having to walk even further than you guys did.  And I still don’t have any water!”  He doused himself with the garden hose and told us to go on without him.

Les and I biked the last 15 miles of paved roads back to the finish.  I was exhausted, and Les, a strong road biker, rode behind me to encourage me to keep up my speed.  We arrived only 45 minutes past the official race cut-off of 7:00 pm.  Don Mann and Steve Kirby hugged me at the finish line, thinking that I had at last finished an Odyssey race.  “We missed three checkpoints,” I told them, ruefully.  This fact officially disqualified us. Don shrugged.  “Oh well,” he said.  “Did you have fun?”

Of course I had fun. We all did. And Team Beer Nuts, perverse as we are, will be back to try again in September.

Getting schooled – An adventure racing rookie goes to camp