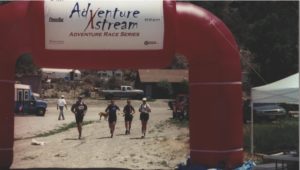 It can’t be easy, being Marc Bender, captain of Team Fred.  With an adventure racing wife, a nine-year-old daughter, and a crazy job that keeps him out until 3:30 a.m., he gets a lot of practice with sleep deprivation.  Not that he needs much sleep; during Primal Quest this season, he was seen reading a paperback book while his teammates slept.

It all started six years ago when Bender, 49, did several Hi-Tec sprints with his wife (Carla Bender of Team Saga).  Encouraged, he did his first 48-hour race that same season.

“We wore cotton t-shirts, huge backpacks and hiking boots,” he says.  “We were too stupid to give up, and somehow, we came in 8th.”  The passion grew, and Marc began logging eight or nine races a year.

Team Fred didn’t have a defined beginning, a moment in time when a plan was born.  It just happened, somewhere along the way.

“I went to E-camp (Epinephrine’s weekend AR camp) in my second season, and started feeling pretty confident.  I talked to people who had never raced before, people at work or on other team’s support crews, and they would say, ‘I’d like to try it but…’  When I heard the ‘but’, I knew they were Team Fred material.  All they have to do is promise me they’ll never give up, and then I can get them through the race.  I’m like a little Yoda Master, teaching the secrets of AR.”

Contrary to popular belief, the team name is not an acronym, but a reference to cycling jargon.  A “Fred” is a rookie that hasn’t a clue about his sport and looks like a geek, wearing all the wrong clothes, saying the wrong things, and using the wrong gear.

Besides coaching his teammates, Marc also makes sure they have fun during their first races.  When heads are hanging, he sings “Desperado.”  He tells his own version of Snow White and the Seven Dwarfs.  He figures out what each personality needs to get them past their mid-race demons—a pat on the back?  A kick in the ass?—and delivers it.  And despite becoming more and more experienced himself, he never tires of the crazy things that rookies do, like jumping at hallucinations.  One year, during a tough paddle pitting heavy Kevlar duckies against a vicious headwind, a Team Fred racer insisted he could make more progress by swimming with the boat in tow.  After two hours of nagging, he finally persuaded Marc to let him try it.  When he jumped out of the boat, it drifted away and the sheepish racer couldn’t catch it.

“Marc understands people and motivation.” says Karen Lundgren, of Team Epinephrine.  “He has a way with words to bring out the best and build a person’s confidence.”

“If he lets you have a nap, CHECK YOUR WATCH!” Team Fred racer Christopher Ado says.  “He’ll wake you up five minutes later and tell you it’s been a half hour.  And for the last ten miles of a trek, he’ll tell you ‘three miles to go, we’re almost there!’  I really believe he can get pretty much anyone to finish an adventure race with him.”

The facts bear that out.  Marc estimates that he has initiated 54 rookies into the sport through Team Fred, winning him an Ambassador Award from Dan Barger in 2002.

“When they cross the finish line and I see that look in their eyes that says their lives have changed…that’s what I want from this sport,” Marc says.  And for many of us, isn’t that really what AR is about?

Getting schooled – An adventure racing rookie goes to camp